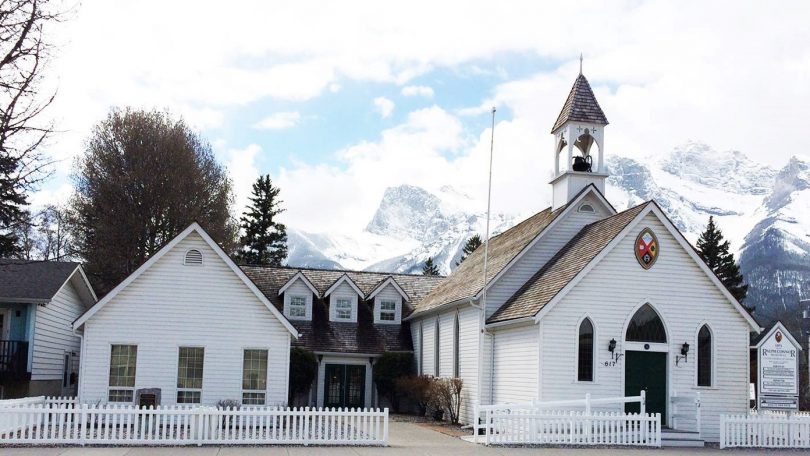 The Ralph Connor Memorial United Church is a one and one half-storey wood frame structure situated on two lots in the centre of the Town of Canmore. Completed in 1890, the church embodies the classical mission style of ecclesiastical architecture and features horizontal wood siding, an engaged central bell spire with a pyramidal roof, and pointed arch windows.

This building is an important part of the history of the Presbyterian Church in Alberta. It was constructed in 1890 to 1991, two years after the establishment of a Presbyterian Mission in Canmore – the first mission station established by this church in Southern Alberta.

Following the construction of the Canadian Pacific Railway through Christian missionaries quickly followed the railway workers, coal miners, shopkeepers, lumbermen and a few families to the Bow Valley On January 25, 1891 the inaugural service was held in the newly constructed Canmore Presbyterian Church led by a young Presbyterian minister, Charles Gordon. Under the pen name of Ralph Connor, Charles Gordon was a prolific novelist as well as Church leader after leaving Canmore in 1892. His novel, “Black Rock” drew upon his years in Canmore and the Bow Valley telling the story of his “fight for a sober and clean town”.

Gordon preached in this church until 1894. In that year he was called to St. Stephen’s Presbyterian Church in Winnipeg, where he would spend the remainder of his ministry. A prolific writer, Gordon eventually became a major figure in Canadian literature. Black Rock, a novel based on his experiences in the Canadian Rockies, was his first of thirty works, which would secure for Gordon, under the pen name of Ralph Connor, a place in Canadian literary history. As a tribute to this man of both ‘the cloth’ and ‘the written word’, the Canmore United Church was renamed the Ralph Connor Memorial United Church in 1942.

In the early years other Christian denominations used the Church for their services. The Literary Society, Ladies Aid, various choirs and the Young People’s Society used the Church Hall bringing miners, railway workers, townfolk and their families together to forge a true community. Early ministers would decamp from Canmore to Banff in the summer months to service the tourists. Throughout the year they ministered other mining and railway communities in the Bow Valley.

In 1925 Canmore voted to join with Methodist, Congregational and many Presbyterian congregations across the country to form the United Church of Canada. In 1941 the name was changed to Ralph Connor Memorial United Church to memorialize the first minister of the Church. A stone cairn from the cement plant quarry in Exshaw with a memorial plaque can be found in the Churchyard.

Ralph Connor is an active United Church with services on Sundays at 10 am and a contemplative service on Wednesday evenings.  The Church sanctuary is well known for its acoustics and serves as a venue for community choirs and concerts.  The Church Hall is used by community groups for meetings and events. 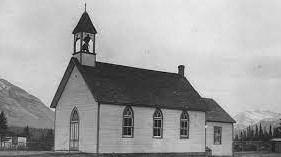 Charles William Gordon was born at Glengarry County of Canada West in 1860. The child of a fire-breathing Presbyterian minister and his devoutly pious wife, Gordon was naturally attracted to religious service. After completing his studies at the University of Toronto, Knox College, and the University of Edinburgh, he was ordained as a Presbyterian minister and sent to Canmore to complete four years of mission work. A Presbyterian mission – one of the denomination’s first in southern Alberta – had been established in the community two years earlier. After three years of ministering to the communities of Banff, Canmore, and Anthracite, Gordon was called to serve St. Stephen’s Church in Winnipeg. He remained at Winnipeg for the rest of his life and became a remarkable prolific and successful author, writing under the nom de plume Ralph Connor. His first novel, Black Rock, drew upon his experiences as a frontier missionary living in the shadow of the Rocky Mountains. At the height of his writing career, Gordon was arguably the most popular author in Canada. His sentimental stories of adventure, moral struggle, and “red-blooded Christianity” captivated early twentieth-century Canadians. Gordon used his successes as a writer to further his commitment to spread the spirit of the Christian Gospel. His religious vision was expressed in his ardent advocacy for temperance, labour rights, and the progressive ideals of the Social Gospel movement. It was also evident in the central role Gordon played in bringing together Methodists, Presbyterians, and Congregationalists to form the United Church of Canada in 1925.

Constructed between 1890 and 1891, the Ralph Connor Memorial United Church is one of the earliest Presbyterian churches built in Alberta. Like many early churches in the province, the building was constructed in the Carpenter Gothic architectural style. This style, which rendered the brick and stone forms and details of Gothic Revival architecture in wood, was popular in frontier communities because of its economy, its readily accessible materials, and its simplicity. The church embodies the Carpenter Gothic style in its wood construction, bell tower, and pointed arch windows. The narthex originally added to the building in 1925 and enlarged in 1948 is also typical of Carpenter Gothic buildings.

CHARACTER DEFINING ELEMENTS
The character-defining elements of the Ralph Connor Memorial United Church include such features as: