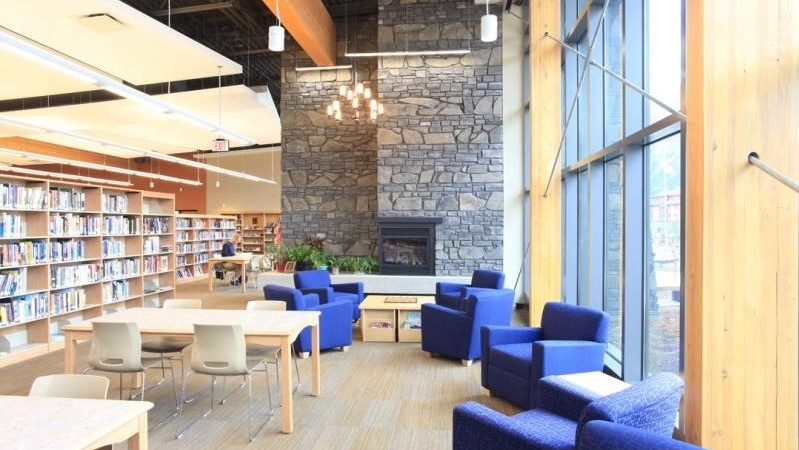 The Canmore Public Library is celebrating its 50th birthday in August 2021. In recognition of this milestone, the library will be celebrating all year long.

In December of 1970, an Australian woman wrote to the Town of Canmore expressing an interest in setting up a library and museum in the town. Although her offer was not taken up, it was her letter that started Town Council on the way to establishing the Canmore Public Library. A Library Board was appointed in March of 1971, and in August of that year, Town By-Law 96 was passed, providing for the establishment of a municipal library.

The library’s first location, opening in December, 1971 was in the basement of the Roman Catholic Church Hall. However, the cold basement and dangerous stairs prompted the Library Board to request a new space for the library. Shortly thereafter, the collection was moved to the Town Office and Fire Hall building, where it remained until the opening of the Policeman’s Creek Centre in December of 1979.

16 years later the library moved into a renovated liquor store at its location on 8th Avenue, marking the occasion with a grand opening celebration in January 1996. The library remained there until making its move into its current home in Elevation Place in 2013.

When the library first opened in 1971, it started with a collection of 500 used books stored on two donated shelves. it was open 8 hours a week and run solely by volunteers. Many years and several moves later, the library is now housed in a custom-built space over 11,000 ft2, has a collection over 66,000 items and more than 20 staff.

Did you know that Anne of Green Gables played a role in the beginning of the Canmore Public Library?

Before women like Elizabeth Rummel, Doreen Toker, and Betty (Hrdlicka) Hardly were sorting dusty books in an icy cold church basement, the Canmore Public Library was the dream of an Australian woman named Margaret Tootell.

Margaret had fallen in love with Canada as a young girl while reading L. M. Montgomery’s Anne of Green Gables. Her love of Canada grew over the years as she collected more and more books on Canada, and eventually she was able to visit Canada first hand.  “I fell in love with your wonderful country – – especially the Canadian Rockies.”

A life long lover of books, Tootell spent 25+ years of her life collecting books and other worldly treasures. On December 18, 1970 she sent a letter from Victoria, Australia to the Canmore Town Council outlining her dream to relocate to Canada, the Rocky Mountains being her first choice, and bring with her her impressive personal library that was made up of thousands of titles. Her desire was to open a library using her personal collection and leave it all in trust to the town and the townspeople of Canmore to be carried on for generations.

While this isn’t exactly what happened with Tootell and her estate, this letter created a spark that ignited the creation of the very first library board, and the rest is… well, history.