Home » History of the Catholic Church in Canmore 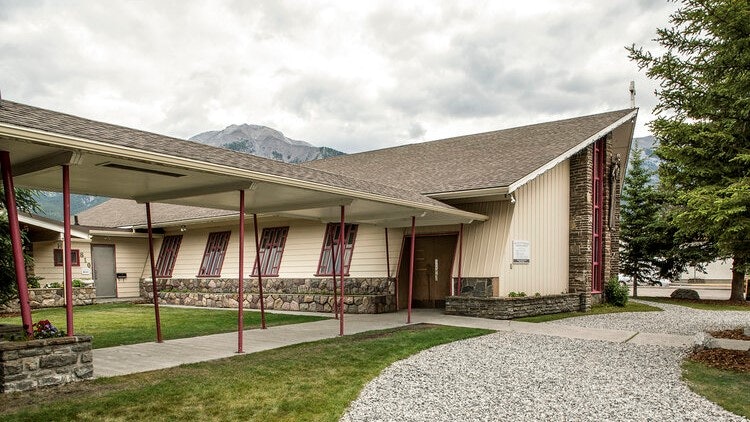 Jesuit Missionary Fr. Pierre de Smet crossed into the Spray Lakes valley in 1845. During his brief stay there, he baptized six children and one elderly man whom he also buried according to Catholic burial traditions. These were the first baptisms and Catholic burial to take place in what would one day become the Diocese of Calgary and Catholic parish of Canmore.

1The history of Canmore is inextricably tied to the construction of the Canadian Pacific Railway. Without the forward push of the railroad through the mountains and the subsequent discovery of coal reserves, the town would not have come into existence. And if there had been no workers to lay the iron rails, there would have been no “Chaplains of the Line”, those intrepid and hardy Catholic missionaries who ministered to the spiritual needs of first the laborers and then the coal miners and their families who settled in the valley.

In 1893 -120 years ago Canmore had a population of 200-300 people. Most were “Coal-Miners” and their families, 156 of these were Catholics. At this time the residents decided to have their own Church and with the help of the Congregation of Oblates of Mary Immaculate, built the “Little White Church” in six months.

1893 to November 1960, the first Catholic Church was blessed by Father Joseph Lestanc, who was Superior at Calgary and Administrator of the Diocese of St. Albert. It was dedicated to the Sacred Heart of Jesus with the assistance of Father Comire and Brother Brochart.

As time went on, the Sacred Heart Church eventually owned the whole block from where the Canmore Legion is today, to the old Catholic Church, on the corner of 7th Ave and 7th Street. On the West side of the “1st Church” was the Church Hall & on the East side was St. Martha’s House, where the Sisters used to live, until 1961when they moved to the Banff Hospital. The Church also owned two more lots that are on Main Street, which was their first Church Hall and Rectory, where Radio Shack was located for many years. The Little White Church was in operation for 67 years, until Oct 23, 1960.

During 1958-59, the Parish Council decided it was time for a new Church building. It began construction on April 9, 1960. It was also built in six months. Parish Council Member Walter Riva with the help of Angelo Maschio convinced the Canmore Mine, Lefarge, Catholic families and Miner’s families to help build the Church. Canmore Mines lent machinery and donated most of the materials.

The community took turns, 4 teams of 10 men each working five day shifts from 6:00 am – 10:00 pm. The new Church is almost a duplicate of the Little White Church except it is longer and wider. They also built living quarters for the Priest which was joined to the Church, and a parking lot on the East side. Bishop Carroll assisted by Father Malo and Rev. Adam Sebastian blessed the New Church under the name Sacred Heart Church.

On August 1, 2001, the Calgary Diocese twinned Sacred Heart Parish in Canmore with St. Mary’s in Banff and the new name for the parish, incorporating the two churches was Our Lady of the Rockies Parish. In 2015, Bishop Henry decided to separate the two parishes once again, to better provide pastoral care of the souls in the Bow Valley. The Canmore parish retained the title of Our Lady of the Rockies, while the Banff church went back to its original title.

The parishioners of Our Lady of the Rockies started to talk and plan for a new church as early as 2004. The initial committee was set up under Jim McKinley and Fr. Silvano Vargis on March 1, 2004. The price of building lots in Canmore stalled the plans for a couple of years. Then Guy Turcotte of Silvertip offered to donate the land as early as March of 2006. The land donation agreement was not signed until March 5, 2013 and the work of planning the new church began in earnest. The building committees were set up and blessed by Fr. Bryan Frank on December 1, 2013.

The Capital Campaign to raise funds started in March of 2015 and raised 2.1 million in pledges. We sold the downtown church and lot. In 2017, Bishop McGrattan announced that the new church would be a Diocesan Shrine to Mary in honor of the 150th Birthday of Canada. In the last days of 2017, many masses at Sacred Heart church had standing room only. In January of 2018, the masses were moved to Our Lady of the Snows Catholic Academy gym on weekends and at the temporary parish office on weekdays. Ground was broken on June 25, 2017 for the new Shrine Church. The Consecration Mass for the Shrine is set for Friday, May 1, 2020.

Submitted by the Our Lady of the Rockies Catholic Church.