The Canmore Miners’ Union Hall was completed in 1913, built by coal miners who volunteered their time and expertise to construct a meeting hall and office for their union, which was formed in 1905 as Local Union 1387 of District 18 of United Mine Workers of America.

Canmore’s miners began meeting in secret in 1903 at the base of the hoodoos — well away from the mine workings — as a move to improve safety, working conditions and wages. Coal miners working for the H.W. McNeill Co., which operated the mines for the Canadian Anthracite Coal Co., were only receiving $1.25 for 12 hours of work. They also faced some of the most difficult mining conditions in the Northwest Territories (Alberta did not become a province until 1905) that included steep, gas-filled seams of coal that led to a massive explosion in 1901 that killed eight miners. Led by Pete Paterson, the first District 18 president, the union held its first meetings in the Finn Hall, which stood in a Finnish neighbourhood on Mineside near Whiteman’s Creek (now Canmore Creek).

The Union executive – Steven Kalina, president, Mike Warren, recording secretary and Nicholas D. Thachuk, treasurer – instead began to meet in a shack, owned by a man named Housenburger, near the railway station, until the Union Hall, begun in 1910, was completed in 1913.

After it opened, the Canmore Miners’ Union Hall became a community centre as well as meeting space for the union, eventually replacing the Canmore Opera House as a place for entertainment, such as dances, movies, plays and celebrations. In 1936, the school board began holding its meetings in the hall, as well. In the spring of 1920, electrician R.O. Davis prepared a quote for the union executive to wire the hall for electricity and install 40 lights and 11 snap switches, four of which were two way switches. Davis quoted a price of $231 for the work, but it is not known if the job was done that same year. According to Edna Appleby in Canmore: The Story of an Era, the first building to have power on Townside (the north side of the Bow River, while everything on the south side was known as Mineside) – was the Canmore school, built in 1922.

After the mines closed in 1979, the Union Hall fell into disrepair and in the early 1980s, the municipality considered demolishing the building to create a parking lot – this was before three houses that faced Seventh Street and a barbershop, located along the alley, were demolished to create parking. Instead, Pine Tree Players, which had been using the Union Hall to mount productions since 1978, along with the Red Barn Committee, saw a different path. By 1982, the two organizations raised $105,000, which included a Canada Manpower grant, to renovate and refurbish the building and give it new life. Alberta Premier Peter Lougheed re-opened the Union Hall on July 1, 1983 as a community centre. This renovation changed the original roof line. For the hall’s centennial in 2013, the original materials and appearance of the building were beautifully restored by community donations and volunteer labour. The resulting landmark affords us a glimpse into the early days of the town with the monotone facade evoking a feeling of stepping into an old black and white photo.

Explore the Canmore Museum’s holdings related to the Miner’s Union and the Miners’ Union Hall.

HERITAGE VALUE
The heritage value of this property lies in its relationship to Canmore’s labour history. In 1901, a massive explosion inside the dangerous gas-filled seams of the Canmore killed eight workers. In 1905 miners organized as Local Union 1387 of District 18 of United Mine Workers of America.  In 1909, in response to a strike to improve working conditions and wages, the miner’s union was evicted from mine lands; a new union was then built Townside between 1910-1913 and was in use from 1913 to 1979.  It is the sole public building still standing in its original location that dates back to Canmore’s early settlement.

CHARACTER DEFINING ELEMENTS
Architecturally, the false front gable and recessed entry of the hall are typical of commercial buildings in early 20th century resource boomtowns. False fronts lent dignity to what were sometimes more rustic log, or even tent structures behind. The facade of the Miner Hall emulated the stone or brick fronts found in larger, more sophisticated centres with modest wood construction and simple, Classically inspired cornice detailing. 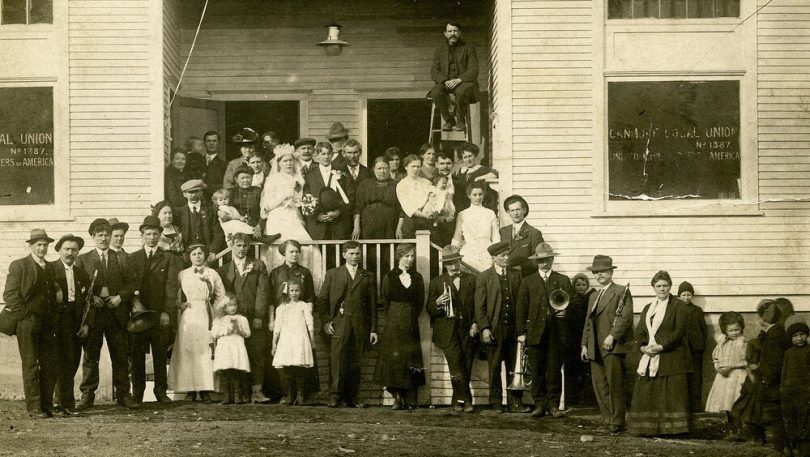 Wedding party at the Canmore Miners’ Union Hall circa 1920’s 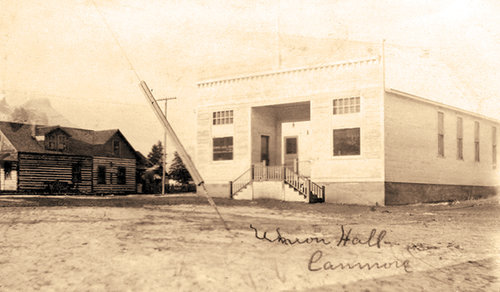 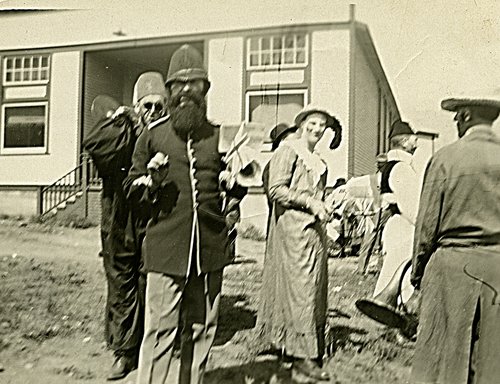 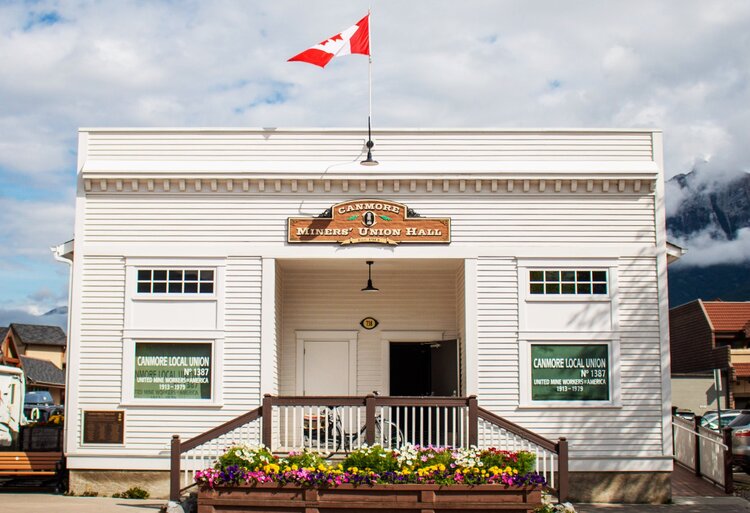