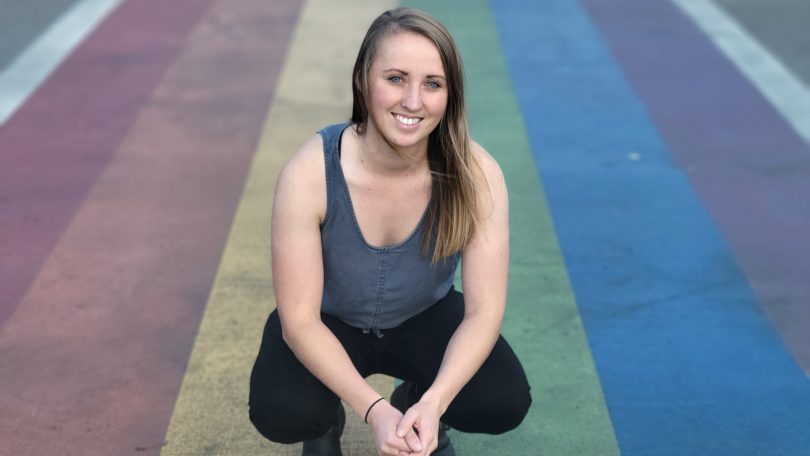 First and foremost I wish to recognize that I currently reside on stolen land. I live, recreate and work on the territory of Treaty 7. I acknowledge these past, present and future generations and stand with them in solidarity.

I have lived in the Bow Valley since 2014. I flew over from Australia like many others excited to meet new people, learn new skills and, most importantly, at the time, ride the world-renowned ski hills close by. It was here in Canmore I was able to fully recognize and understand my Queerness.

I was born in New South Wales, Australia and raised in the outskirts of Brisbane City, Queensland. I was the youngest of four to parents who were devout members of the Church of Jesus Christ of Latter Day Saints or as many may be more familiar with – the Mormons. Life felt normal in my younger years as all my friends and extended family all attended church every Sunday, we prayed every morning, night and before dinner, participated in weekly church events and my parents paid their 10% tithing every paycheque. I remembered all the lessons and all the Sunday school songs growing up. I took the bread and water and shook hands with the bishop and missionaries every Sunday.

I remember when I was younger the word ‘gay’ was thrown around frequently and negatively. I remember discussing homsexuality with my parents who told me that we all have trials in our life and for some that is same-sex attraction. But it is merely that, a trail we must overcome. In the end, in our eternal life we will understand the plan God set out for us but we cannot act upon our temptations as it is sinful. This ‘lesson’ stuck with me for years to come. As I got a little older and I was sent to a private school I started making friends who weren’t religious and were confused that I spent my weekday mornings from 7:00 to 8:00 am studying scripture before school. I started questioning the church teachings and with the help of the worldwide internet (something my parents never had access to when they were younger), I happened across what some would call ‘anti-mormom literature’ or as I refer to it now, ‘history’.

At that age I was hungry for knowledge and I was curious about the world outside my little bubble. As it is for most, my adolescent years were filled with angst and confusion. Because of my affiliation with the Mormon church, I developed a longing to be ‘normal’. I felt left out at church because I questioned everything and listened to screamo music (not approved by the elders). I felt left out at school because I wasn’t allowed to hang out with friends who weren’t Mormon. I ended up hating church. I hated going, I hated feeling different. I hated the judgement and I hated how it was organized. I spent many years blocking out my emotions and using punk rock music to drown out my reality.

When I was 17 and out of school I met a girl and we bonded really fast as friends. We literally spent all our time together. I had my drivers license and a car so we went to the local shops, to the movies, down to the beach, we even worked together. Either I was sleeping at her house or she at mine. Because she was female my parents did not care that we slept together almost every night. Nothing ever happened between us but there were multiple moments during our friendship when I felt her touch and my heart would start racing. I didn’t entirely understand it at the time but I was attracted to her – I simply didn’t want to admit it.

When I was 19 life hit me like a ton of bricks. I experienced heavy anxiety and depression from suppressed trauma. I quit my job, dropped out of university and hardly left my room for over a month. I turned to self harm to suppress suicidal thoughts. After seeing a counsellor and taking medication for a few months I decided to move out of my parents house and move in with my sister an hour away. I started to get myself back on track. I enrolled in university, made new friends on the Sunshine Coast and surfed basically every day. I started dating a boy who I ended up dating for 2 years. He told me he loved me early on in the relationship but I could never bring myself to say it. Eventually we broke up as we were clearly not going anywhere and I could never bring myself to feel that connection.

It wasn’t until I was 20 or maybe 21 years old that I revealed everything to my parents that I no longer wanted to be a part of the Mormon organization. I had been in and out for a few years from the ages of 16-21 but I was finally mature and brave enough to tell my parents I didn’t believe in any of it. I thought they would take it a lot harder but apparently they themselves had been doing some research and weren’t 100% committed anymore. They told me they still needed to do more research but that they were open to discussion with the rest of the family who were all on the same page.

When I turned 22 I decided I needed a life change. I had gained a lot of confidence again and had some savings in my bank account so I booked a one-way ticket to Canada. I was extremely single and was determined to stay that way. That lasted 5 months before I met my now fiancee. We started off as friends but that didn’t last long. There’s only so many nights you can hold someone’s hand while falling asleep before you form a connection. With her it all made sense and feeling attracted to another female (as someone who identifies as female) didn’t seem like an issue or something I needed to be afraid of. It felt natural and I felt like I finally belonged in someone’s arms. All our friends around Canmore were extremely accepting when we came out to them as a couple. We knew the hard part would be coming out to our families.

When I did come out to my parents it was really hard because it was over video chat while I was here in Canada and they were in Australia. I had gotten to the point where I didn’t want to hide anything anymore. I came out to my older sister first and she had already figured it out. I wasn’t too concerned about her reaction as I knew she would be supportive but I had gone to her first to ask for advice as to how to tell my parents. She was with my parents when I told them and I don’t know what I was expecting but there were some statements I’ll never forget. “What will you tell your future husband that you dated a girl at one stage” was one of them. One thing I’ve learnt since that day is that our parents are human as well and coming out as Queer, still today, is still sometimes hard for all parties involved.

As a 29 year old from Australia and living in Canada I am privileged to be surrounded by accepting people. Go back only a few decades however and the idea of being Queer was unspoken in many households. The negative concepts and thoughts surrounding Queer culture is ingrained in many people’s minds. This holds true for my parents, especially with their religious upbringing, so when I came out to them and they made an effort to love and be accepting regardless, I realized how important the saying ‘love is love’ truly is. I love my partner and I love my parents and my parents love how much my partner and I love each other. Basically there’s a whole lot of love and there’s no room for hate and that’s how it should be.

My family now proudly and publicly supports the Queer community. They have come such a long way since I came out to them but there’s still much more to learn and understand, even for myself. I believe that if Ex-Mormon parents, and my 89 year old grandma can tell me how much they love and accept me, there’s an opportunity for everyone to educate and recognize that ultimately love is love. If it takes a little more time then there’s a whole community who will help with the process. This is why Pride and visibility is so important and why I’m proud to share my
story.