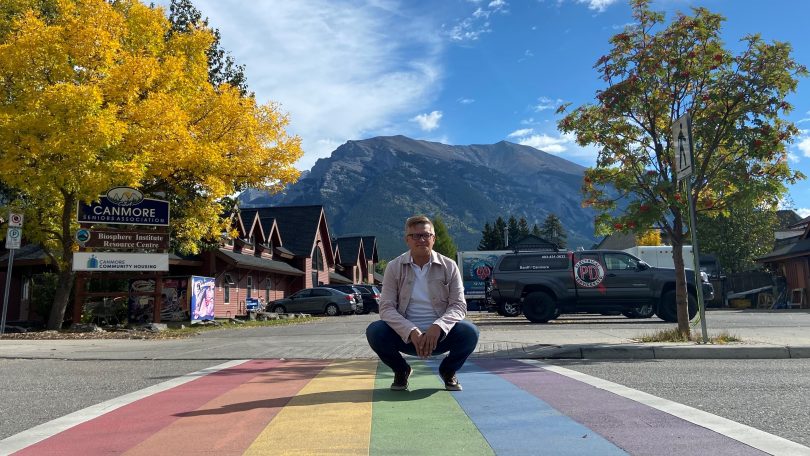 My story doesn’t begin, nor end, with my coming out journey.  I am defined by far more than this story, though in many respects, it is central to my drive to create more compassionate, more inclusive, healthier communities.

My journey began in a coal mining town not unlike Canmore where I had deep family roots, where one of my grandfathers worked at the mine, the other was a businessman. Three of my four great grandfathers immigrated to Canada to work in the mines and the culture of coal mining was inherent in my family.  I was also the oldest male in the family of my generation, so, at least in Eastern European culture, I had the added responsibility of carrying on the family name.  I also grew up Roman Catholic.

From an early age, I can recall being different.  I was adopted, and while, loved as I was, I wasn’t quite like the rest.  Maybe it was the bullying, the teasing, the insistent day-to-day fear of what I would encounter at school because I didn’t play hockey or excelled at sport at all or was a bit more academic.  Maybe they all knew what I didn’t want to accept.  Growing up in a small town with few examples of what it meant to be different – on TV, in life, anywhere – I shoved any urge to understand what was going on inside my head around identity and attraction down.  I buried myself in school, in drama (Grease, here I come – can you be any more macho than playing Danny?), and in one sport I could excel at – curling. Mark Tewksbury wrote in his book, Straight Talk From A Gay Jock, about his own upbringing and how he felt different in a similar manner throughout school and into his early adult years; later in life, I was relieved to learn I wasn’t really alone in this chapter of life, thought at the time, it was excruiating. I was terrified of letting down “the family”.

I also joined the board of my local historical society when I was 14 and became one of the founding members of that museum when I was 15. I took classes in museum work throughout high school as a both an opportunity to learn but also to escape being bullied.  Museum work was then and is now my happy place.

As an early adult, I found a solution in the hands of the Roman Catholic Church.  I had gone to a Catholic Charismatic Renewal weekend and found “the way” to bury the confusion.  This was followed by several rounds of conversion therapy both within the Catholic Church and later in a charistmatic pentacostal church. Satisfied that I could be straight, I became an ordained minister, got married, led the so called “normal” life.

Life has a way of tripping you when you least anticipate it, however.  The old confusion came back unexpectedly and coming out was not a moment when the trumpets sounded.  Was I relieved, yes; was I delirious with joy at the time, no.  It meant the disruption of many relationships, and that was painful.

The process of rebuilding an identity happened with the love and support of my immediate family, though many of the fringes of my family didn’t know what to do with me – they remain very religious and this, a sin.  Support also came from some unlikely places.  I mention Mark Tewksbury; his book had a profound impact on me.  Mark and I are of similar age, grew up in similar circumstances, and if he could be a celebrated Olympian and still be queer, it gave me the strength to celebrate who I am without apology, though that too has been a journey.  Mark became the role model as an adult that I never had as a youth.

My work in museums is deeply rooted in creating community, to bridge differences, to bring to light the many different stories that together form us – a town, a collection of people from all walks of life – to build understanding, care and empathy. Bringing the stories of those who are part of the LGBTQ2S+ community to light as part of the Stories of Queer Canmore project is with the hope that we can create bridges, to create awareness, understanding and empathy, to show, as my friend and fellow historian Kevin Allen says in his book Our Past Matters – Stories of Gay Calgary, “we have always been here”.  Like women’s stories, the story of LGBTQ2S+ people have been largely ignored (or buried) – we weren’t part of history (or herstory or theirstory). As museums, we need to tell the whole story of our community and there are many people who need to find a chair at the community table – and in the many pages of our community story, both past and present.  Everyone’s story matters.