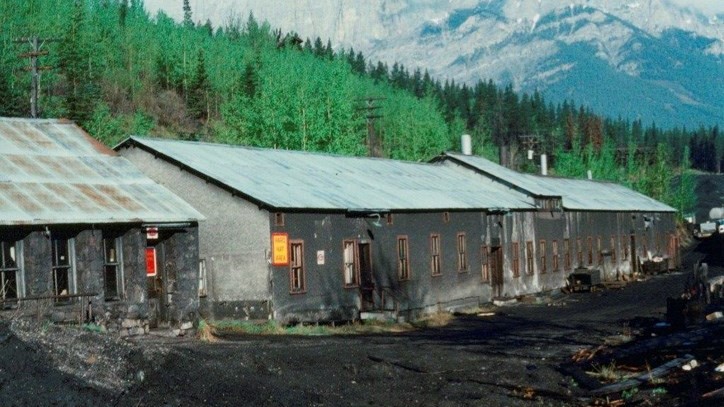 The Canmore Mines Lamphouse is significant as the last standing building in Canmore that represents structural evidence of the coal mining activity that took place at this site in the early and middle part of the 20 th century.

The Canmore Mines Lamphouse is significant for the Canadian Anthracite Coal Company Ltd., which was established in 1885. The company was the most expansive and largest lasting coal mine producers on the western slope of the Rockies with their largest client being Canadian Pacific Railway who needed coal to fuel their coal-powered, steam-driven locomotives.

The architectural significance of the Lamphouse resides in it being the only remaining building in the Canmore area made of local Rundle Stone and constructed in a unique “dry packed” construction technique. The construction technique was popular in the Falmenta region of Italy, which led to the speculation that it was constructed by the famed Italian mountaineer and guide Lawrence Grassi.

The Lamphouse has symbolic significance for the vital function it served within the coal mining operations in Canmore. A concern over the welfare of miners led to a strict system of monitoring of who entered the mine. A system was devised whereby, the miners reporting to work and leaving at the end of each day exchanged a personal tag for headlamps so they were accounted for.

DESCRIPTION
The 1918 Canmore Mines Lamphouse is a one-storey, square, Rundle Rock/Rubble stone structure situated above a closed mine portal. The structure has a hipped roof on the east end and a gable roof on the west. The masonry walls contain ten large window openings and a door on the north elevation. The building is the last remaining structure of the historic Canadian Anthracite Coal Company Ltd. and its later entities and is located within the Bow Valley Corridor in Canmore, Alberta.

HERITAGE VALUE
The historical significance of the Canmore Lamphouse lies in its provision of structural evidence of the coal mining activity undertaken at this site during the early and middle part of the 20th century, when coal production was Alberta’s second major industry. The structure is also important as evidence of the Canmore Mine, one of Alberta’s largest, and of the regulation of mining activity in Alberta, which evolved slowly during the early part of the century.

The discovery of coal in the Canmore area goes back to prospectors French and Marsh opening the Marsh mine. Dr. George Dawson, chief geologist of the Geological Survey of Canada referenced coal in Canmore in 1883. Brothers Tom and William McCardell and Frank McCabe exposed an important coal seam that demonstrated Canmore to be the home to high-quality semi-anthracite coal.

On October 28, 1886, Queen Victoria gave a Royal Charter to the Canadian Anthracite Coal Company, a subsidiary of an American mining company, granting the company permission to mine coal in Canmore on leased land. The Canadian Anthracite Coal Co. opened the No. 1 mine in 1887 in the valley formed by Canmore Creek. The company’s main customer was the Canadian Pacific Railway, which needed coal for fueling their coal-powered, steam-driven locomotives. In its first month of operation, it produced 864 tons of coal, which was shipped across the Bow River by barge and then hauled to the CPR main line by wagon. As early as 1904, the No. 2 mine operated with its official opening in 1907. The Lamphouse was built in 1918.  The mine was a key employer in the Bow Valley corridor and made the Canmore region one of Alberta’s significant coal-producing regions. The mine closed in 1979.

The Canmore Lamphouse is the only stone structure in the Bow Valley that dates back to that era. Rundle stone is a type of siltstone quarried in the Canmore and Banff region, notably from the area immediately surrounding Mount Rundle. It was a popular building material due to its high quality and durability as well its attractiveness and the ease with which it could be worked. Dry packed construction is a style of building with cement blocks or stone. The stones are fitted tightly together with minimal or no mortar between them to hold them together. It is an unusual form of construction for Alberta as it requires a high level of skill. Dry pack construction was popular in the Falmenta region of Italy, which has led to the speculation that the Canmore Lamphouse may have been constructed by the famed Italian-Canadian mountaineer and guide, Lawrence Grassi, who was a trained stone mason and coal miner from Falmenta.

The Lamphouse is unique in the number of windows it has to take advantage of available natural light. It has four windows of equal size on the east and south walls, and two on the west wall. A large concrete form centered on the inside of the west wall would have supported a piece of machinery, most likely a charging system generator.

Each miner who worked underground during the 51 years that the No. 2 Mine was in operation, reported to the Lamphouse to pick up a flame safety lamp or a fully charged headlamp and a “tag” or “check” with a number stamped on it. Fully charged, the lamps would provide ten hours of light to work by. The miner’s lamp was his most important piece of equipment; without it he was in pitch-black darkness, and could not have worked underground. At the end of his shift, he returned his lamp and tag to the lamp man, who maintained and recharged it. Brass tags were carried for safety. Each tag had the miner’s identification number on it. Each numbered tag corresponded to a numbered nail on a large wooden board in the Lamphouse. If the miner did not return his check at the end of the day, a rescue team was sent into the mine to find him. This number system could tell the mine rescue teams how many miners were underground at any time in the event of an underground explosion or other mishap.

The No. 2 mine contained a higher quality of coal; unfortunately this type of coal contained higher amounts of explosive methane gas. This necessitated the use of flame safety lamps and constant air monitoring. In the early days, the Canmore Mines used a time-tested way of testing for explosive air: a canary that was kept in a small hand held cage. When exposed to dangerous gas, the tiny bird would show signs of distress and collapse. That area would be evacuated immediately and the bird resuscitated using oxygen contained in a cylinder atop the cage.

As the last standing mine building in its original location, the Canmore Mines Lamphouse is symbolic of the mine history for the town and its importance to the mines operations. Without illumination no miner could go underground. The flame safety and electric lamps provided a safe and efficient form of illumination and a means of testing for poisonous or inflammable gas.

CHARACTER DEFINING ELEMENTS
The exterior character-defining elements of the Canmore Mines Lamphouse include, but are not limited to: