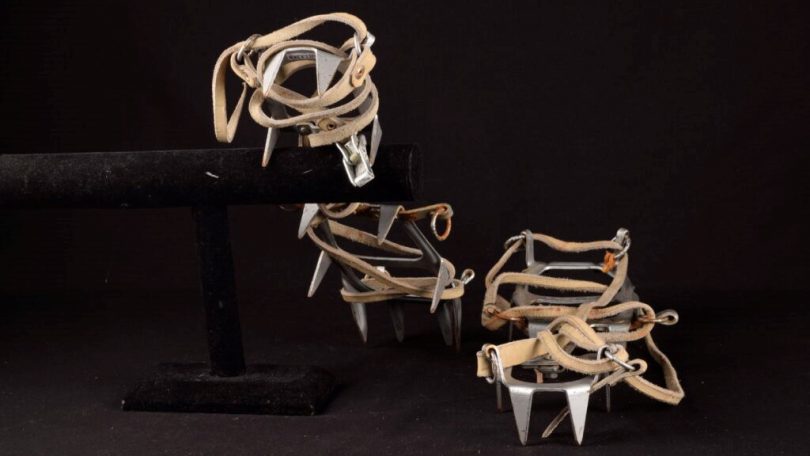 These Austrian-made crampons (ca. 1960), used to walk on hard snow and ice, belonged to Eric Lomas. Eric was a founding member of the Association of Canadian Mountain Guides (ACMG) and was a lifetime member of the Alpine Club of Canada.

ric was born in England but came to western Canada to enjoy spectacular limestone climbing. He only intended to stay for a few years, but like many of us, a few years turned into decades. Over his years of climbing in Jasper and working as a ski patroller at Lake Louise and Norquay, Eric became interested in guiding and passed his exams in 1960, which were at the time administered by Parks Canada. He eventually moved to BC to become the manager of Garibaldi Lifts Limited, which would later become a little ski resort known as Whistler. While there, Eric became interested in avalanche control and eventually became one of the foremost pioneers of avalanche control and safety in Canada. He worked in avalanche safety for the Granduc mine (mines, many times located in steep and mountainous areas, often require fairly intense avalanche control to operate) and pioneered the use of “avalaunchers” (large guns that launch explosive charges) and helicopter bombing in avalanche control techniques.

In 1980 Eric returned to the Bow Valley and served as the secretary for the ACMG for several years. Eric died in February of this year at the age of 88, having lived in Exshaw since 1995. Eric had once planned to start a mountain climbing museum, but encountered difficulties and eventually donated the beginning of his collection to the Canmore Museum.